Throughout the holidays I  crafted new delicacies as well as prepared old tried and true favorites. This is my usual routine when it’s party time: be a little adventurous and also play it safe. The one recipe that stood out this year for its popularity and lingering appeal is this red pepper spread which is much like a red pepper and walnut pesto that is in one of my cookbooks, but is also a bit different. It is so hauntingly delicious that we inevitably found all different ways and excuses to keep eating the stuff – a kind of muhammara binge. 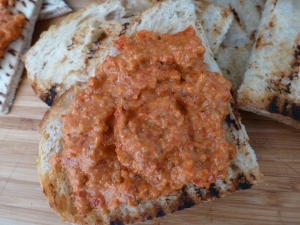 Muhammara originated in Syria, though it is also found in cuisines throughout the Middle East under different names and with slight variations. That it is quick and easy to prepare adds to its charm, though I  would not hesitate to assemble this aromatic spread even if it were laborious – it is that good. The one traditional ingredient that I omitted was pomegranate molasses because it is so difficult to find; however, the combination of ingredients is still magical without it, so no worries here.

Surrounding muhammara with hot pita bread is customary, but I suggest you find a good sourdough or other chewy, crusty bread to toast or grill, and use it as a base for the muhammara and you will be paid off in dividends. I like to toast slices of ciabatta, rub them with a clove of garlic that has been sliced in half, and then brush them lightly with olive oil before I arrange them on a plate or in a basket. I know that the muhammara already is infused with garlic and olive oil, but the extra dose on the toasted or grilled bread is the embodiment of perfection.

In a food processor or blender combine all of the ingredients except the olive oil. Process until finely chopped. Slowly pour in the olive oil until it is all absorbed but still retaining a granular texture to the spread.You don’t want it to be completely smooth.

Scrape the mixture into a bowl and serve at room temperature.