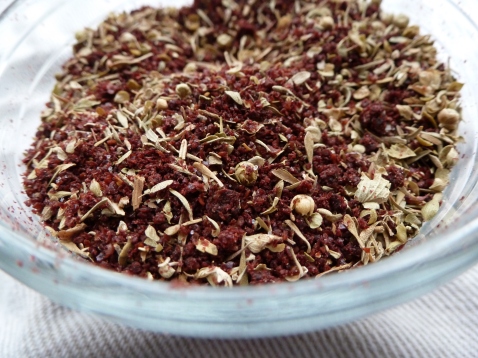 A friend recently gave me some ground sumac to use in a salad that was featured in Yotam Ottolenghi’s cookbook Jerusalem. I was previously unfamiliar with this spice and so I did a bit of research. It is made from the dried berry/fruit of the sumac shrub and has a beautiful burgundy color and a lemony flavor.  Ground sumac is the principal ingredient in the Middle Eastern spice mixture called za’atar (pronounced ZAR-tah), and it is this fabulous spice blend that I want to focus on today. 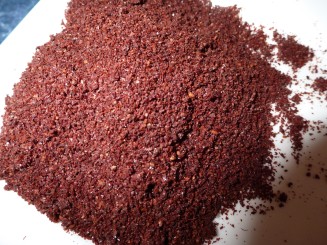 Za’atar, used all over the Middle East, is sprinkled on hummus, labneh (yogurt cheese) flatbread, and pita bread, spread on meats, such as kebabs, and added to chickpea salads – to name just a few of its uses. In other words, it is used freely as a spice in all areas of cooking in that region. You can purchase za’atar or make it yourself by combining sumac, sesame seeds, dried thyme, dried oregano, and perhaps marjoram and other herbs, as some versions do. Here are the proportions that I follow:

I love za’atar on pita chips.  I split pita into 2 rounds (I use scissors to cut around the edges) and brush a very light coating of olive oil on the rough sides of the pita.  I sprinkle za’atar all over the surface, then cut the rounds into triangles to make chips.  I bake them  at 350 degrees for 7 minutes or so, or until golden. These are spectacular served alongside chickpea salad with feta and some labneh or tzatziki. 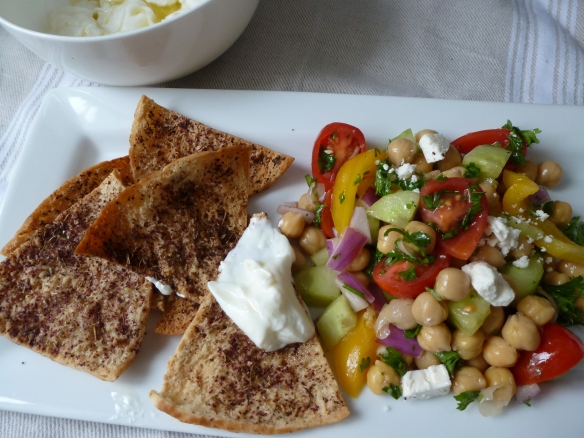